I spent about a week in Monterey with an old friend recently to attend a couple of events: The Rolex Monterey Motorsports Reunion at the WeatherTech Laguna Seca Raceway and the Pebble Beach concours d’elegance. In a sense, both events are about as far away from tradeshows that you can get. But as event marketing goes, they’re at the top of their games.

Consider this: according to the website, “the competition attracts 15,000 affluent aficionados who pay a minimum of $325 for general admission.” And this: “Entrants often spend hundreds of thousands of dollars to acquire a car, hundreds of thousands to restore it, and tens of thousands more to transport it to Pebble Beach to compete for our top award. Come day of show, the cars pulling onto the eighteenth fairway of Pebble Beach Golf Links often have a total estimated value of half a billion dollars.”

So, yeah, the one-percenters, basically. And of course, there are a lot of other vintage car enthusiasts who like the show and the spectacle who are not in that top echelon (that would include me, just to be clear!).

Just driving around the area over the week gives you an opportunity to see hundreds of exotic and high-end cars that are just out cruising: Porches, McLarens, Teslas, Ferraris, Maseratis, Rolls-Royces, and a few that are simply unrecognizable or unique one-of-a-kinds.

This is a prime market ripe for pitching high-end products. There are numerous car auctions, one of which set a record over the weekend for selling a car at auction for a record $48.4 million. In case you’re wondering, it was a 1962 Ferrari 250 GTO.

Car manufacturers spend a ton to show off their newest models. Infiniti, for instance, sets up a large temporary building just above the festivities on the 18th fairway at Pebble Beach. During the runup to the event, they offer visitors a chance to drive new models for a couple of miles. Other car makers over the year have included Jeep, Cadillac, Chrysler, Tesla and many others. In fact, the first I ever heard of a Tesla was in 2008 when they introduced their roadster at the event. In 2016, Tesla was offering a chance to drive their new Model X (which I did).

Ferrari brought several dozen vintage autos and displayed them on the fairway of hole number one.

There were nine Tucker automobiles at the show, along with a handful of Chinese cars and a collection from the Raj of India.

Concept cars encircle the main putting green in front of the pro shop, where we’ve seen everything over the years from an electric VW bus, to McLarens, Rolls-Royces, Porches, Lincolns, Maseratis, Hennesseys, Genesis’ and many more – too many to count. Just a bunch of glorious eye candy for car fans.

Every year there is a raffle during the event, where up to four brand new model cars are given away. Former Tonight Show host Jay Leno has done the honors for years, telling the same jokes year after year.

Some 1200 media members cover the event, with about a quarter of them from outside the United States.

But at the bottom line, the event is a fundraiser for several dozen charities in the area. Over the years the they event has generated millions of dollars that goes to help area children. This year the event raised $1.8 million which will be distributed by the Pebble Beach Company Foundation to 85 local charities.

Check out the gallery below. I’m sure I’ll be back next year. It’s already on my calendar. 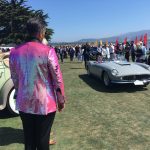 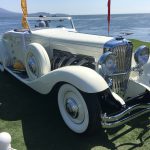 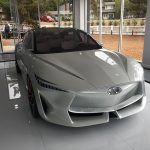 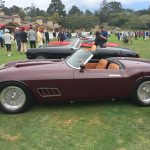 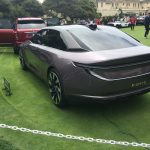 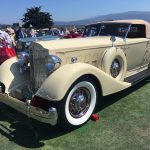 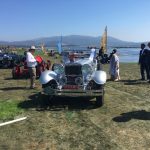 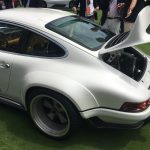 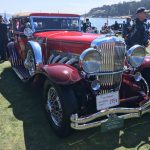 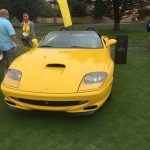 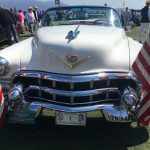 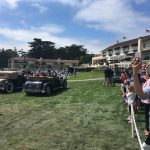 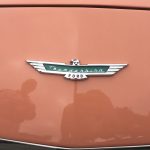 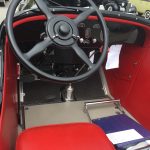 Get My New Book: Tradeshow Superheroes and Exhibiting Zombies!

What they're saying about Tradeshow Success...

"It's a great book, Tim. I've been doing trade shows for years and yet I never knew much about how to go buy or select an exhibit until I read your book. I highly recommend this to small to medium sized businesses looking to take their trade show marketing to the next level." - Anders Boulanger, CEO and Founder of the Infotainers

"Your book is really wonderful. Amanda in our Marketing Department saw it and said, “Oh, that’s really smart! It could be like a textbook for marketing students and professionals.” She’s right. It’s a really smart move for your brand. The content is great. I’m still trying to figure out if QR codes really do kill kittens : )" - Matt Cox, Vice President of Marketing, Bob's Red Mill

"When Tim asked me to read Tradeshow Success, I thought, “Oh crap! Does the world really need another prescriptive manual about tradeshow marketing?” Boy was I wrong. You are in for a treat. Tim takes the dark arts of tradeshow marketing and makes them accessible to anyone – whether you’re a novice to a tradeshow warrior. You’ll meet characters like Katie from Gotcha! Cookies ‘n’ Treats and Wally from Pharaoh, with engaging and entertaining stories about their tradeshow challenges. Social Media? Tim immerses you in the “whys and hows” of using LinkedIn, Twitter, Emails, etc. to drive attendees to your booth and boost your ROI. And that’s just one chapter! Design ideas, staff training tips, lead management, and more. It’s all there for you to enjoy, implement, and share." - Mel White, Classic Exhibits